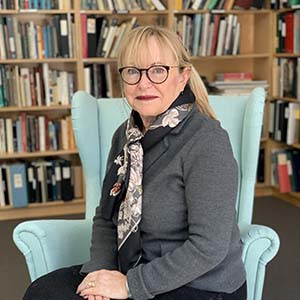 Emily Eig is the founder and president of EHT Traceries, a women-owned company incorporated in Maryland and headquartered in Washington, D.C.  As the head of EHT Traceries, she combines management of a fifteen-person firm with her work as an architectural historian and preservation consultant.  Her technical knowledge is focused on late 19th– and 20th-century buildings and the integration of new buildings into historic settings, including historic sites, campuses, and districts. It includes a thorough understanding of current historic preservation issues.  Her work with federal, state, and local architecture is well known; she has worked in the District of Columbia, Maryland, Virginia, New York, Texas, Louisiana, Pennsylvania, Massachusetts, Illinois, Michigan, and Hawaii.  Further, through her role as the head of EHT Traceries since 1989, she has participated in numerous exceptional preservation-related projects around the country.

Ms. Eig specializes in late 19th– and 20th-century buildings and the integration of new buildings into historic settings, including historic sites, campuses, and districts. She focuses on public, institutional, military, religious, commercial, theater, commercial, and residential architecture, as well as the history of city planning and 19th and 20th century cultural landscapes.  Her expertise in historic and contemporary documentation, construction techniques, building materials, on-site investigation complements her ability to provide creative preservation solutions for individual resources as well as for large-scale settings.  As a preservation specialist, she provides direction for compatible new design related to historic buildings, sites, and districts, advises on the interpretation of preservation laws and regulations, and regularly assists owners, developers, architects, and preservation technicians with the interpretation and analysis of historic resources. Her strength related to handling complex projects, including public-private partnerships, is well known.

Over the last thirty years, Ms. Eig has served as Project Architectural Historian and Preservation Planning Consultant for numerous major historic projects in Washington, DC and in other cities around the US.  In these roles, she has directed research; prepared Historic Structures Reports and Historic Preservation Plans; advised on local and federal preservation reviews including Determination of Eligibility and Section 106 Memorandum of /Programmatic Agreements; guided efforts to rehabilitate historic buildings using the Secretary of Interior’s Standards; and advised on the design compatibility of major new additions to historic buildings and new construction in historic districts.  She works on a regular basis with the State Historic Preservation Offices.

Selected projects related to the integration of new architecture into historic settings:

Selected preservation projects around the United States include: